The Indian economy grew by merely 5% in the first quarter of the financial year (‘FY’) 2019-20, down from 5.8% in the previous quarter. Registering a continuous downward spiral, the GDP growth of 5% for the first quarter of FY 2019-20 had been the slowest in more than six years. The previous low in GDP growth was recorded at 4.3% in the last quarter of FY 2012-13. In an attempt to revive the Indian economy, the Government recently announced major tax concessions. While announcing these tax concessions during the Press Conference in Goa, the Finance Minister, Mrs. Nirmala Sitharaman said that these measures were part of steps the Government has been announcing after consultations with the industry to deal with the slowdown. These amendments were introduced in form of an ordinance viz. the Taxation Laws (Amendment) Ordinance 2019, which made amendments in the Income Tax Act, 1961 (‘the Act’).

1.1 Salient features of the amendments

Further, such companies opting for reduced tax rate under section 115BAA shall not be required to pay Minimum Alternative Tax (‘MAT’).

The company would not be allowed to claim the following deductions / incentives:

b) Losses brought forward attributable to the aforementioned deductions/incentives claimed in earlier years would lapse.

c) Depreciation would be allowed as per the rates to be prescribed.

d) Companies currently availing incentives/deductions listed above will have an option to move into CTR at any point in time. Option to avail concessional tax rate to be exercised on or before the due date for filing the income tax return. The option once exercised cannot be subsequently withdrawn.

In order to attract fresh investment in manufacturing and provide boost to ‘Make-in-India’ initiative, section 115BAB has been introduced with effect from FY 2019-20, which would allow any new domestic company incorporated on or after 1 October 2019 making fresh investment in manufacturing, an option to pay income tax @ 15%. The effective tax rate for these companies shall be 17.16% [tax @ 15% plus surcharge @ 10% & cess @ 4% (on tax & surcharge)]. Further, such companies shall not be subject to MAT.

The aforesaid concessional tax rate is applicable subject to the following conditions:

a) Company should be set up and registered on or after 1 October 2019 and should commence manufacturing on or before 31 March 2023.

b) It should not be formed by splitting up or reconstruction of an existing business.

c) It does not use second-hand plant/machinery, except in certain prescribed cases.

d) It does not use any building that was previously used as a hotel or a convention centre.

e) It would not be allowed to claim deductions/incentives as listed in section 115BAA above.

f) Transactions between such domestic company and person closely connected shall be subject to Transfer Pricing.

g) Option to avail CTR is to be exercised on or before the due date for furnishing the company’s first return of income. The option once exercised cannot be subsequently withdrawn.

The following table summarizes the comparative position of tax rates:

Tax rates under the normal provisions of the Act

[Tax rates (in %) are inclusive of applicable surcharge and cess]

1.1.2  Rollback of enhanced surcharge introduced by the Finance (No.2) Act, 2019 for the super-rich and Foreign Portfolio Investors (‘FPI’s)

The Finance (No. 2) Act, 2019 introduced enhanced surcharge of 25% (applicable for taxable income above INR 2 crores but below INR 5 crores) and 37% (applicable for taxable income above INR 5 crores) introduced by the Finance (No.2) Act, 2019 on the super-rich individuals/Hindu Undivided Family (‘HUF’)/Association of Persons (‘AOP’)/Body of Individuals (‘BOI’)/Artificial Juridical Person. This resulted in FPIs set up as trusts and Category III Alternate Investment Funds also coming within the purview of the enhanced surcharge, which adversely impacted investments into Indian capital markets.

In order to stabilize flow of funds in the capital market and boost economic growth in India, the Ordinance provides exemption from the aforesaid enhanced surcharge rates in respect of capital gains earned on transfer of securities (including derivatives). No relief in respect of any other income earned by such FPIs.

The effective corporate tax rates across various countries in the world are as under: 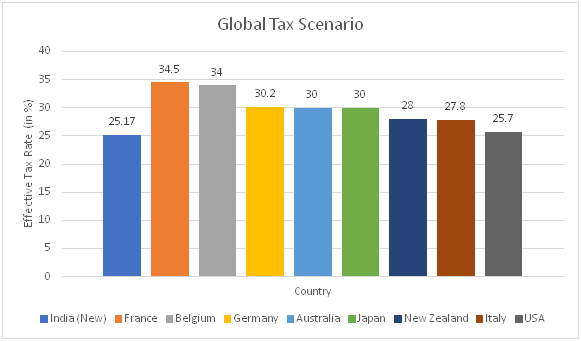 The Base corporate tax rates across various countries in Asia are as under: 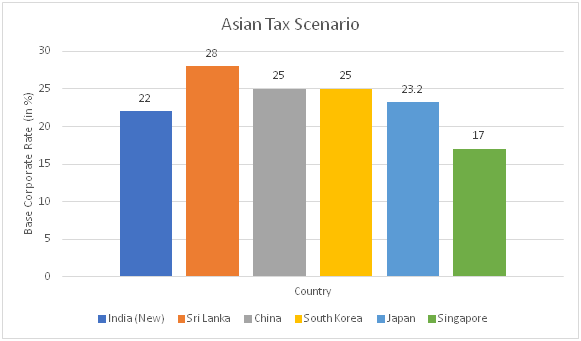 As can be observed from above charts, India’s corporate tax rate is now at par/even lower than various countries across the world. With such sharp cut in tax rate, India Inc’s competitiveness vis-à-vis entities from other countries will improve.

From the perspective of choice of legal entity to be set-up in India, Limited Liability Partnership (‘LLP’) structure has been gaining popularity after permitting Foreign Direct Investment in LLP under the automatic route (in sectors where there are no conditionalities). The main reason to opt for LLP structure is due to the fact that after payment of tax of 30% (excluding surcharge and cess) on the total income, there is no further tax on distribution of the profits to the partners and about 65% of the total income of the LLP can be received by the partners. Therefore, partners of an LLP tend to receive a higher amount of profit in their hands as opposed to a company where the profits are subject to another level of Dividend Distribution Tax (‘DDT’) of 20.56%.

Under the CTR, choice of entity i.e.  LLP or a company will have to be evaluated on the basis of facts of the case. The key distinguishing aspects of a company and LLP are summarized below

From effective tax rate and cash repatriation perspective, comparative study of company vs LLP structure is as under:

Under CTR, section 115JB(5A) of the Act provides that MAT provisions shall not apply to a person who has exercised the option under section 115BAA.

The Central Board of Direct Taxes (‘CBDT’) vide Circular dt. 2 October 2019 has clarified that since MAT provisions in its entirety would not be applicable to the companies opting for CTR, the question of MAT credit set-off does not arise. Hence, companies opting for CTR would not be allowed to set-off any brought forward MAT credit against normal income-tax. In this regard, since no timeline has been prescribed for exercising the option under section 115BAA, a domestic company having credit of MAT, may opt for CTR after utilising the said credit against the regular tax payable.

1.3.2 Set-off of losses pertaining to the earlier years in relation to deductions/exemptions

As per section 115BAA(2) of the Act, losses which are carried forward from any AY and which are attributable to any deduction/exemption (for example, loss on account of additional depreciation, weighted deduction claimed in case of scientific research expenditure etc.) claimed in earlier AY shall not be allowed to be set-off against total income of the current year. Further, as per section 115BAA(3) of the Act, such losses shall not be available to be carried forward to any subsequent year for set-off.

1.3.3 Method for set-off of unabsorbed depreciation other than relating to additional depreciation

Manner of set-off of UND under CTR – Option-1

Manner of set-off of UAD under CTR – Option-2

In this regard, reliance can be placed on the CBDT Circular which states that in absence of any specific indication, method of set-off of losses, which is more beneficial to the taxpayer, should be adopted. Therefore, Option 2 (i.e. under the assumption that UAD was set-off against income of Year 2) may be adopted for set-off since it is more beneficial to the tax payer. However, positive clarifications are awaited from the Government/CBDT on this issue.

1.3.4 MAT impact in case of capital-intensive companies and car-leasing companies

Manufacturing and capital-intensive companies which generally have substantial investments in fixed assets, usually claim higher depreciation under the Act as compared to the Companies Act, 2013. In order to tackle the slowdown faced by the automobile sector (especially car-leasing companies), the CBDT on 23 September, 2019 issued a notification increasing the depreciation rates under the Act in case of motor-cars (other than those used in a business of running them on hire) and motor buses, motor lorries and motor taxis used in a business of running them on hire to 30% and 45% respectively from the previous rates of 15% and 30% respectively in case these assets are acquired on or after 23 August 2019.

Considering the fact that MAT shall not be applicable for companies opting for CTR, such capital-intensive and car-leasing companies shall be in a position to avail two-fold tax benefits on account of higher depreciation under the Act and concessional tax rates under CTR.

1.3.5 Deduction in respect of employment of new employees

As per section 80JJAA of the Act, deduction of an amount equal to 30% of additional employee cost incurred for the course of such business in the previous year, for 3 AYs including the AY relevant to the previous year in which such employment is provided shall be allowed (subject to certain conditions) while calculating the taxable income.

While companies opting for CTR would not be able to claim the specified deductions or incentives, deduction under section 80JJAA has been kept out of the purview of the such deductions.  Therefore, people intensive companies can continue to avail this deduction even under CTR.

However, similar anti-abuse provisions have not been introduced for the domestic company opting for concessional tax rate under section 115BAA of the Act.

Introduction of CTR is being touted by market experts as the biggest set of economic reforms after the historic 1991 Liberalisation.

Introduction of CTR is likely to boost to foreign investments and revive the spirit of the Indian economy amidst the continuing economic slowdown.

Further, CTR is likely to result in higher profits being distributed to the stakeholders thereby increasing their disposable income followed by increase in demand and consumption.

Encouraging setting up of manufacturing units would give stimulus to ‘Make in India’ initiative of the Government, boost overall profitability of corporate India and promote more employment.

While certain issues discussed above may be prone to litigation, where the intent is to bring more tax certainty and reduce tax litigation, it is expected that necessary clarifications in this regard would be issued in due course.